So a slight change of plans. I originally created the Knights for nickelodeon's pitch thing, thinking it was an annual thing. I looked it up for 2016 and it's not. So I scrapped that plan and made "Knights" more long term. Then a week ago I found about Nick's Artist program opening from April 1st to March 1st and thought I'd try for that, create a few new board shorts etc. I started boarding the first story and I quickly lost interest in it. Not because it isn't good, but just because it's not fun to work on. Drawing the boards became a chore. Then while I was procrastinating, I discovered that Nick has a Shorts program open, that might be what I was thinking about originally, but whatever. It's already open and I have 24 days (End date April 15), about 3 weeks to get a pitch in. I'm not going to be working 3 weeks on it, cause I need to also make a solid portfolio for the Nick Artist Program. And I also don't want to release Knights just yet. Even so, the current script I have on it is still 8 minutes long, this short is supposed to be 2-3 minutes.

So I'm going to make a spinoff of it. I know, a spinoff of something that doesnt even exist yet? But yeah, gonna focus on a secondary character who I have no idea what to do for. I just made him in a doodle, and it dawned on me, he'd do a good short. And his short will help craft my world that I'm trying to build for "Knights" a little better. This has no action, as the character isnt a fighter. He just delivers pizza. He is also a centaur. Introducing Ethan the Medieval Pizza Delivery Manhorse. 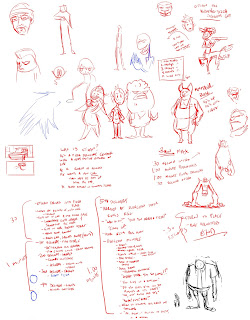 Fairly simple concept. He gets his orders, goes out to delivers them, last delivery is in a dungeon and he has to go through the whole thing. Returns back to work, and more deliveries. End. 3 minutes. Short. Simple. And all about world building and focus on showing the main character.

I'm not completely sold on the name Ethan. I'll probably change it to something more.... majestic, like Soy. Or Tofu. or Teatree. Maybe Teatree, and he goes by T. See! Brainstorm.

So yea, feel free to let me know what you think about the idea. I'll have a newer update and probably thumbs tomorrow.
Posted by Unknown at 2:16 AM